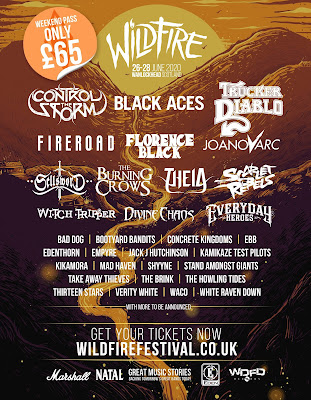 
Posted by The Burning Crows at 22:55 No comments:

Thrilled to announce that the 'One Night Only' tour continues on October 19th at The Station, Cannock  for the first ever Gravity Festival along with Mason Hill, Collateral & Fugitive... Early bird tickets on sale NOW - Be there. 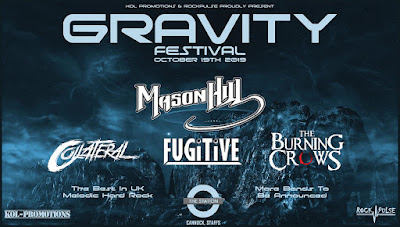 Posted by The Burning Crows at 17:02 No comments:

Thrilled to announce that the 'One Night Only Tour' continues on October 4th at the legendary Tivoli in Buckley... Grab your tickets. Tell a friend. Be there.

Tickets on sale NOW at http://tivolivenue.com/product/the-burning-crows-friday-4th-october-2019/

Posted by The Burning Crows at 16:11 No comments:

The 'One Night Only Tour' continues on into 2020 with a slot at Hard Rock Hell AOR VIII on Saturday 14th May... These festivals always sell out so grab your tickets now and we'll see you in exactly one year!

Tickets on sale HERE at http://www.hrhaor.com/product-category/hrh-aor-2020/tickets-and-extras/

Tickets on sale NOW at https://www.helloasso.com/associations/heavy-metal-maniac-association - Be there.


Posted by The Burning Crows at 07:03 No comments:

Back By Overwhelming Public Demand...

You wanted it. You got it. For one week only, The Burning Crows are back with a run of summertime shows with Sweden's own Dust Bowl Jokies... Tickets on sale NOW - Be there.


Posted by The Burning Crows at 18:23 No comments:

A very Happy (and belated) New Year Everyone - Hope 2017 is treating you good so far!

You'll have to excuse the radio silence as of late. We haven't forgotten about you all, on the contrary in fact, and so we just wanted to check in and fill you all in with what's been happening... Last year was another great year for us and as always, that's thanks largely to all of you guys travelling round the country to see us, supporting the tours, buying the albums, spreading the word and just generally being amazing.

We can't deny however, that it's getting harder and harder to move up to the next level so to speak in what they call the music 'industry', for it is just that; a very selective money making machine in a world where the expectation is that everything should be cheaper, quicker and more accesible today than it was yesterday. As such in the vast majority of cases, unless you have the money, and we mean serious money, to pay to get yourselves into magazines, onto bigger tours and on the radio, it's becoming ever clearer that the likelyhood of anyone giving you the time of day is probably less than Chapman playing a gig with his shirt on. As such, we've personally never taken a penny back from any of the tours, merch or album sales and have, as a lot of bands do, put thousands of pounds of our own money in to meet the shortfall and keep the beast running so to speak. By beast, we of course mean 'band', not Will.

We're not complaining though and when we think of everything we've done up to now, we wouldn't change a thing and we're pleased to say that looking back, we've always done it our own way, on our own terms, and without getting caught up in the 'game' that so many others unfortunately do. As it happens, we've loved every second. We've been lucky enough to tour the country, seen and been places we've never seen before. Made albums in amazing studios with the most talented bastards around, that we are and always will be massively proud of. Met incredible people and made friends for life along the way whilst of course, having a couple of laughs doing it. Actually, I think we all know that that's an understatement. We've never really stopped laughing since the beginning and looking back on everything we've done together and everywhere we've been together, we really have had the time of our lives and we owe it all to you... So to everyone who's been a part of it with us up to now, it really has been a privelidge, an honour and it goes without saying that The Burning Crows will always be as much yours as it is ours.

As we write this, we realise that it all sounds a bit doom and gloom. It shouldn't. We're not breaking up. Nobody has fallen out. Far from it. We've never actually had a proper argument in all these years and if that's not testament to how much of a good time we have doing this, then we don't know what is. Bands always say "it's all about the music" but for us, in retrospect, not entirely. Obviously the music is a massive part of what we do and the vehichle that makes it all happen, but with us, it's always been about the journey and the people that come with it. The laughs, the stories, the memories and whilst we still love what we do in the way that we do now, we'll keep on doing it and in a manner more persistent and determined than Lance trying to catch a sheep in the Scottish highlands.

What we're trying to say is that what we do next is massively important and we need to get it right instead of getting stuck in a rut as so many unfortunately others do. You see every other week that another great unsigned band has broken up but we absolutely don't want to do that, so instead we're just going to take a little time away from it all to work out where and how we go from here. There's already new songs being demo'd with recording pencilled in at Brino's shiny new studio in Spain later in the year, so this really isn't it and we will be back.

Until then, know that we love you all and from the bottom of our hearts, we thank you all for everything; We would have given up a long time ago had it not been for the endless support you've given us... Here's to the next chapter everyone - see you soon!


Posted by The Burning Crows at 18:54 No comments:

The Burning Crows
Welcome to the Official Blogger Page of "The Burning Crows"
'Subscribe' to our blog for the latest music, videos, tour dates and news...
Your presence is requested... See you at the front